iTunes Is a Relic From the Pre-Streaming Era

by
nikul,
iTunes Is a Relic From the Pre-Streaming Era

When Apple introduced the iTunes Music Store in 2003, it marked to beginning of the digital music revolution. While it took music downloads nine years to surpass CD sales in the U.S. for the first time in 2012, Apple’s idea to unbundle albums and sell digital tracks for 99 cents a piece was the key to mass adoption of digital music downloads and a precursor to the convenience that streaming services would later offer.

When Apple started selling TV shows in 2005 and movies in 2006, iTunes officially became a one-stop shop for all digital media and, owed to the fact that it was the only way to transfer music to your iPod, millions of people were using the iTunes app on Mac computers and Windows PCs despite the fact that the software wasn’t exactly as user friendly as Apple users would expect.

On Monday, during the opening keynote of WWDC, Apple announced that iTunes will disappear from Mac computers with macOS Catalina this fall. The contents of iTunes will be split up between Apple Music, Apple Podcasts and Apple TV in an attempt to disentangle the convoluted mess that iTunes has become over the past few years. While users will still be able to buy music in the iTunes Store, it seems clear that Apple is going all in on music and video streaming, with Apple Music and Apple TV at the heart of its future media strategy. As the following chart shows, streaming has long overtaken downloads in music and video consumption in the United States. In this landscape, iTunes, which turned 18 this year, seems like a relic from a different age. 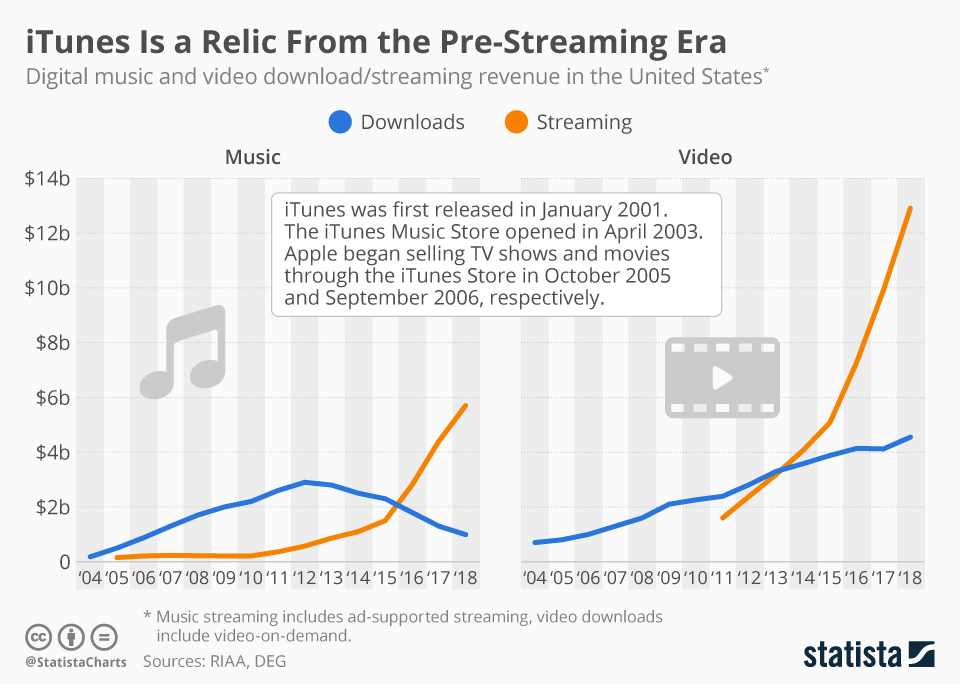 This chart shows digital music and video download/streaming revenue in the United States.